This is a celebration for Retired, Active, Reserve and/or Former Marines and their spouses, and Friends of the Marine Corps. We will celebrate the 244th Birthday of the United States Marine Corps on November 10, 2019. Join your colleagues at the Omni La Costa Resort & Spa, and spend the evening meeting and speaking with our veteran, retired and active duty Marines who have proudly served. The event will include the following:

“Community members are invited to attend a grand opening celebration for the Poinsettia Community Park on Thursday, October 10, at 6600 Hidden Valley Road. A ribbon cutting ceremony will take place at 9:15 a.m. at the new pickleball courts and at 10 a.m. at the playground. Throughout the morning from 9 to 10:30 a.m. there will be self-guided walks to view the three new park improvements, a bubble show and refreshments available.”

“The City of Carlsbad presents Ansel Adams: Early Works art exhibit at William D. Cannon Art Gallery, located at the Carlsbad City Library complex at 1775 Dove Lane. The exhibit features intimate master prints from the 1920s through the 50s depicting Adams’ transition from pictorialism to straight photography and provides a fresh look at this legendary master of the American landscape. On display are 42 photographs, several singular examples are included in this exhibition, including an extraordinary rare print of Moonrise, Hernandez, NM, 1941, and Clearing Winter Story, 1938, Adams’ most celebrated Yosemite view. All works are from the collection of Michael Mattis and Judith Hochberg. The exhibit is traveled by art2art Circulating Exhibitions.”

Join us for an evening of celebration as we showcase the artistic talent of local autistic individuals! Your ticket includes a hosted wine, beer and appetizer reception during our art exhibition featuring 21 artists. A classical musical performance by pianist Michael Dendl will also accompany the art reception. Then join us for screenings of films produced and starring autistic individuals,  including: the short film Ascent by Canyon Crest Academy students; short clips and post-production vignettes by Exceptional Minds of Los Angeles; and our feature film for the event, Autism Goes to College!

Located inside the Dove Library, offering coffee, tea, other drinks, pastries and snacks.

April is Earth Month, and Carlsbad is celebrating with events and programs to help you reduce, reuse, recycle and more. Participation is free for Carlsbad residents. *Advanced registration is required for some events. Join us and help keep Carlsbad beautiful.

Does your child have a cell phone and social media account? If so, don’t miss tomorrow’s CUSD Parent University and YES (Youth Enrichment Services) workshop on the latest teen trends with cell phones and social media and tips and tools to manage them. Cyber Educator, Jon Moffat, will present to parents and community members on Thursday, February 21, 2019 from 8:30 am – 9:30 am at the Pine Avenue Community Center located at 3209 Pine Avenue, Carlsbad. Please see the flyer for other upcoming Parent University workshops.

“Carlsbad City Library is on day two of the Winter Reading Challenge. As a community, we have already completed 1,407 minutes of reading time! Only 148,593 left to go! Keep up the great work, Carlsbad!

It’s not too late to sign up. Visit https://carlsbadlibrary.beanstack.org to create an account and help us reach our community goal of reading 150,000 minutes in the month of January. Need assistance? Email any questions you may have to librarian@carlsbadca.gov, call us at 760-602-2038 or text us at 760-354-9423.” 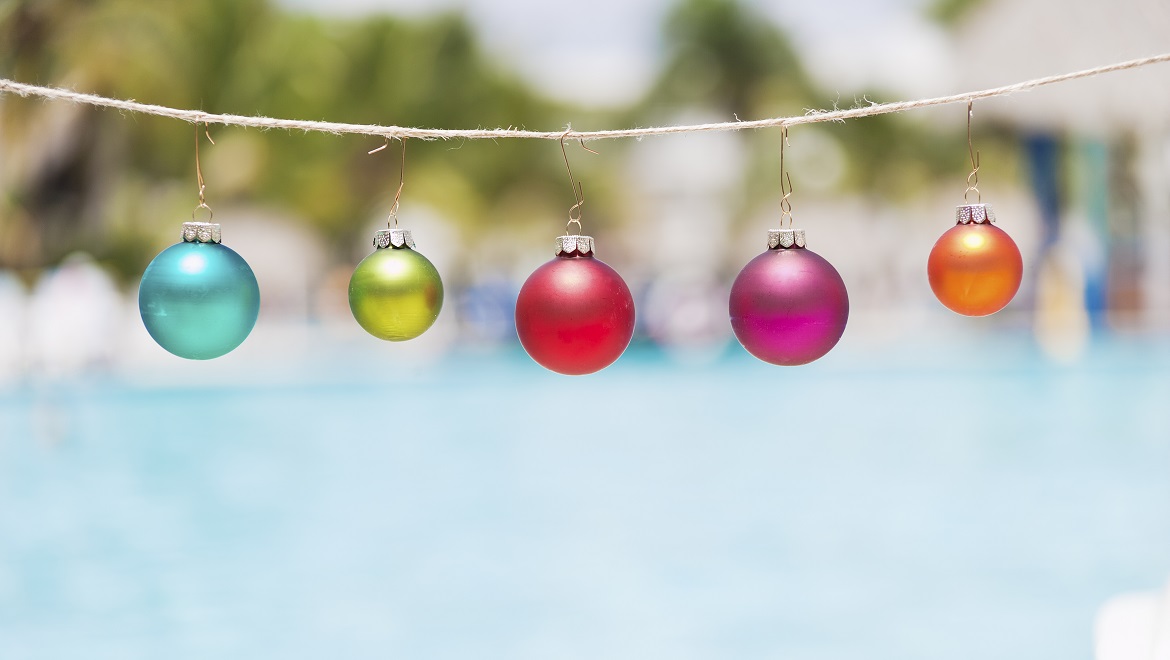 “Add Omni La Costa to your list of family traditions for a memorable and relaxing holiday vacation, featuring world-class accommodations, exciting pool experiences, an award-wining spa, championship golf courses and premier restaurants. There are endless opportunities to connect with your loved ones and create holiday memories here.”

“How do you update a classic? After all, when we refer to a Hollywood star as “legendary” or “ageless,” everybody knows those are code words for “old.”

This is the challenge Omni Resorts inherited when it purchased the La Costa Hotel and Spa in Carlsbad, California, in 2013 after a major renovation. The high-end historic resort, half an hour from the San Diego airport and 95 traffic-choked miles from downtown Los Angeles, has been a weekend and vacation getaway for more than 50 years. The challenge for Omni was to keep La Costa’s flavor, yet make it fresh for a new generation of customers.”

*Soon, the Carlsbad City Council may vote on offshore drilling off our
coast and they need to hear from you.*

*BLUE SHIRT ALERT*: There is an important opportunity taking place for you
to stand in the way of new drilling off our coast. When you come, we will
give you an Oceana T-shirt just for showing up.

This week, tons of Carlsbad residents have been making calls to Mayor Matt
Hall, asking him to join almost every other coastal city in San Diego
County in opposing new offshore oil drilling. *The Mayor and City
Councilmembers are now on notice* that this issue is very important to
residents and they may introduce the resolution soon.

*Now, your fellow residents need you to show* up to the Carlsbad City
Council meeting on Tuesday, June 26th to formally request a vote on this
resolution to oppose new drilling off the coast.

ACTION: Come out and wear blue (Oceana Ts provided) and consider getting up
to speak *briefly* to the council asking for a resolution to be introduced
and passed opposing new offshore drilling off the coast.

See you there! *Action you can take from home right now*:

– Call Mayor Hall (760-801-8055) and ask him to join nearly every other
coastal city in the county in passing a a resolution opposing new offshore
drilling as soon as possible
– E-mail council@carlsbadca.gov to ask the same thing on record.
– Ask three friends to do the same!

“The City of Carlsbad’s TGIF Concerts in the Parks begin June 22 at Stagecoach Community Park, located at 3420 Camino de los Coches. The outdoor concert series runs every Friday through Aug. 17, from 6 to 8 p.m., at community parks throughout the city. Venues open to the public at 4 p.m. Admission is free.”

“Adventure Readers was founded by Leslie Poznanter, a mother and grandmother who has worked as a reading tutor for over 20 years. Leslie’s innovative teaching style has had incredible success helping children of all ages, including kids with learning disabilities and ESL students. It became a regular occurrence for parents to come to her with children who had been told they would have to repeat a grade––only to succeed in bringing that child up to grade level reading, and often beyond, in just a few sessions.”

“Film is a modern visual art form that entertains, educates and enlightens. Spanning a wide range of genres, themes and styles, they represent the breadth of human experience in society through the visual medium of storytelling. Whether a foreign film, an edgy drama or a nostalgic musical, film invite audiences to enter new worlds and broaden their perspective by experiencing a filmmaker’s vision.

All films are presented with free admission and seating is based on a first come, first served basis. Screenings are located at the Carlsbad City Library, Schulman Auditorium at 1775 Dove Lane.”

For questions, contact the Carlsbad City Library at 760-602-2049 or librarian@carlsbadca.gov. 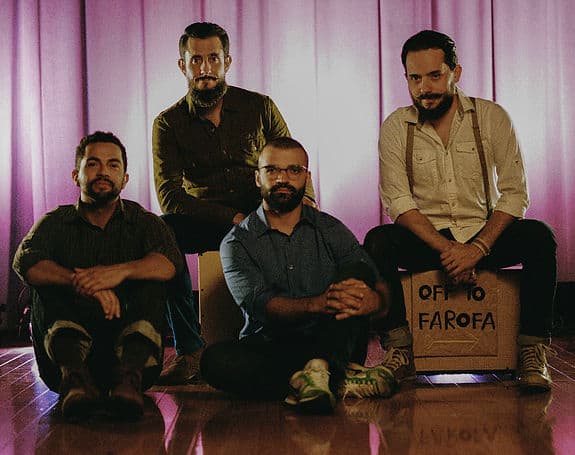 The chemistry and raw talent of Farofa shines in their intimate, passion-filled and captivating performances that move audiences across the world. The electrifying music combines traditional rhythms with modern styling and influences of rock, jazz, flamenco, contemporary classical, pop, deep African rhythmic tradition, Balcan music and that from their native Brazil. Farofa has been honored as the recipient of the California Presenters Spotlight Award, as well as runner-up at the Samsung E-Festival 2016. There is no denying that Farofa’s passion and dedication to performing fresh, new music continues to shine through at every show. Farofa is sure to deliver a musical experience not to be missed.

For questions, contact the Carlsbad City Library at 760-602-2049 or librarian@carlsbadca.gov. 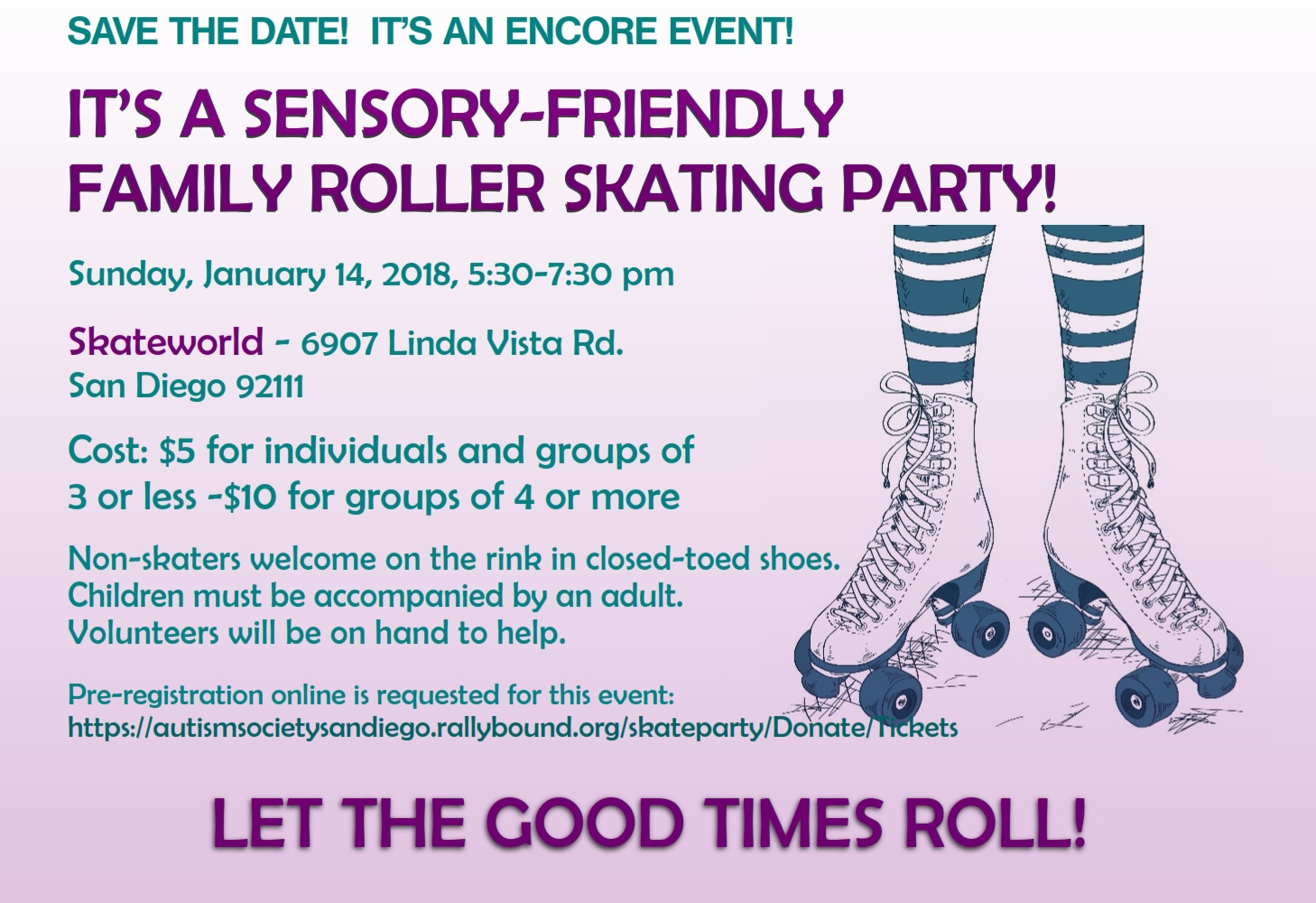 “Join us on Sunday, January 14th from 5:30 – 7:30 PM for a sensory friendly family roller skating party at Skateworld! All ages are welcome to participate, and volunteers will be on hand to help. Non skaters are welcome on the rink in closed toed shoes, and food and drinks will be available to purchase. You won’t want to miss this fun family event!”

It’s the most wonderful time of the year to reduce, reuse and recycle! Here’s a tip: Reuse your gift bags, wrapping paper and tissue paper whenever you can. Let’s all do our part to help keep Carlsbad beautiful this holiday season. 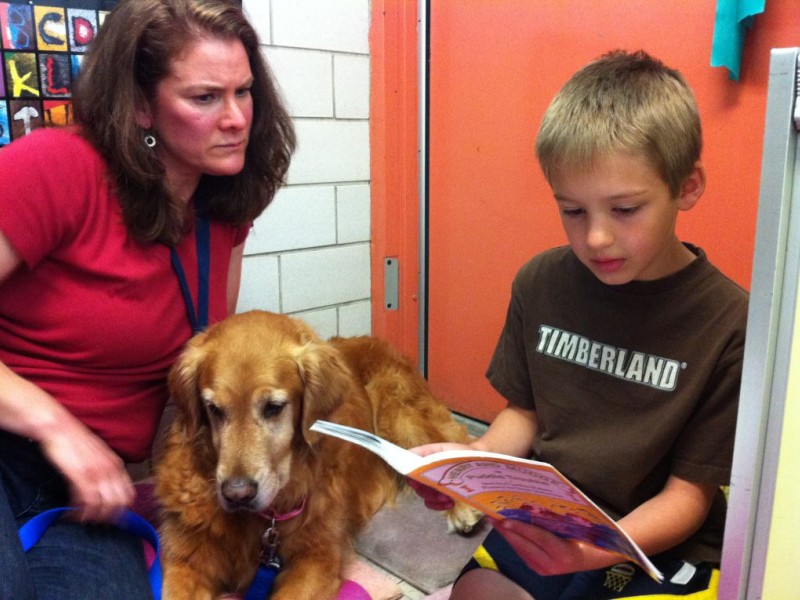 Read your favorite book to a four-legged friend!

Kids will get the chance to meet the dogs and read their favorite books to them.

To learn more about the San Diego Love On A Leash: Paws to Read Program, click here.

“Come out to skate, play and chill with us through the holidays. Our Community Rink is the largest holiday ice skating rink in San Diego and our  NHL Hockey Rink is the first full size outdoor ice hockey rink in the history of San Diego.  Whether you play ice hockey, figure skate or just love to skate during the holidays. Frozen Fairgrounds at Del Mar has enough ice for everyone!”

“The City of Carlsbad is hosting a Science Saturday 10th Anniversary Celebration on Oct. 21 at Carlsbad City Library, located at 1775 Dove Lane.
The community is invited to celebrate a decade of science, technology, engineering, arts and math (S.T.E.A.M.) programming at the library with special guests, exhibits and activities.

“Calling all fans of toasting and tasting! Mike Hess Brewing in North Park is once again teaming up with the Autism Society and Dang Brother’s Pizza for a night of fun supporting our summer recreational programs. Come eat, drink, and explore a fabulous silent auction with a wide variety of items for all tastes. We will also feature an opportunity drawing – last year’s winner won over $300!”

“The Autism Society San Diego is proud to present the first ever, ‘Lights! Camera! Autism!’ art and film event. This is a celebration of the talents of many autistic and developmentally delayed young adults in our San Diego community who are learning valuable skills in the art, music and film industry with an eye on future employment.”

Click here to learn more about the Autism Society of San Diego.

Learn about the research and practical guidelines for using evidence-based practices to promote independence.

Here at Pistachio we love contributing to our community. Autism holds close to our hearts and we understand the every day struggle some families may face. Amy Munera is a wonderful woman whom has been a voice for these children and has done tremendous in helping these families. Help support her and her team for the Second Annual Walk N Rock for autism! Click the link below to donate today!

“Welcome to Rocking Racers!
Please join us at the second annual Walk N Rock for Autism and help us make a difference in the lives of people affected by autism in San Diego county! All funds raised will go to recreational programs for autistic people, including Camp I CAN (AKA the best week of the summer), AWARE, our adult summer recreation program, and more! These programs make a difference in people’s lives, and with your help, we can reach more people every day! Thank you!!” -Rocking Racers

Shop at Pistachio and know that your purchase is helping the Autism Community! Autism Awareness holds a special place in our heart. Therefore, we have pledged to donate 2% of all shampoo and conditioner sales to the Autism Society of San Diego on a continuing basis.

Click here to learn more about the Autism Society of San Diego.